SpongeBob SquarePants and the underwater dwellers of Bikini Bottom are back in a wacky adventure that’s sure to please fans. The Spongebob Movie: Sponge on the Run has our yellow, tighty-whities wearing, Krabby Patty flipping protagonist searching for his missing best friend. Gary the Snail has been kidnapped. SpongeBob and his goofy cohorts mobilize to rescue the adorable slime slug. They learn valuable lessons in courage and friendship along the way. Sponge on the Run is exceedingly silly, but packs in a lot of heart and the TV show’s trademark humor.

The SpongeBob Movie: Sponge on the Run continues with Plankton (Mr. Lawrence) on his never-ending quest to find the secret formula behind Mr. Krab’s (Clancy Brown) delicious Krabby Patties. His devoted robot wife, Karen (Jill Talley), points out the true impediment to achieving this goal, the Krusty Krab’s only essential employee, SpongeBob SquarePants (Tom Kenny). Plankton needs a nefarious plan to get SpongeBob away from the restaurant.

RELATED: The SpongeBob Movie: Sponge on the Run Is Going Straight to Streaming on PVOD in 2021

Meanwhile in Atlantis City, the vain and ill-tempered King Poseidon (Matt Berry) has a beauty regimen problem. His snail slaves have run out of slime. He can’t get his daily slime facial. The king issues a decree for snails, which Plankton uses to his advantage. When Gary vanishes, SpongeBob and Patrick (Bill Fagerbakke) embark on a road trip to find the treasured pet slug. SpongeBob’s absence causes chaos at the Krusty Krab. Mr. Krab and an annoyed Squidward (Rodger Bumpass) realize that the business can’t survive without SpongeBob.

Sponge on the Run has a fairly simple storyline, but loads the film with new characters that are truly bizarre. Keanu Reeves steals the show as Sage, whose head lives in a glowing, rolling tumbleweed that acts as SpongeBob and Patrick’s spirit guide. He pops up periodically to remind the best friends to be courageous. Reeves’ scenes are bonkers weird, but funny and surprisingly insightful. Snoop Dogg and Danny Trejo also have kooky cameos.

Sponge on the Run, the third film in the franchise, is the first to use all CGI animation. SpongeBob’s classic 2D look made the show memorable, but the visual upgrade is welcome here. Bikini Bottom, Atlantis City, and Kamp Koral, where the characters meet as children, radiate with vibrant colors and brilliant textures. Paramount Animation raises their game to match the cinematic quality of Pixar and Disney.

Sponge on the Run will try the patience of anyone who doesn’t find the SpongeBob formula entertaining. The plot is razor thin with a reliance on goofy sight gags. The film is red meat for the devout adult fan base, and will certainly appeal to young children. I’m not a huge SpongeBob fan, but was pleasantly amused by the zany antics and Keanu Reeves’ rolling tumbleweed head. The film serves as a fitting tribute to SpongeBob creator Stephen Hillenburg, who sadly passed away from ALS in 2018. The SpongeBob Movie: Sponge on the Run is a production of Paramount Animation, Nickelodeon Movies, and Media Rights Capital (MRC). It will premiere with the launch of the Paramount+ streaming service on March 4th. 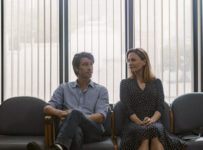 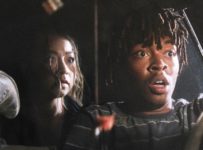 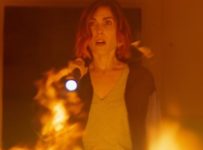 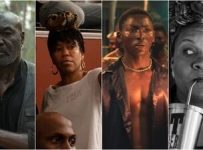 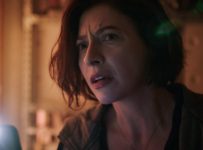 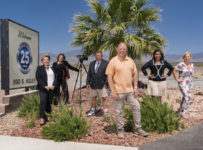