The Mandalorian heats up with the highly anticipated introduction of Gina Carano as Cara Dune, an ex-rebel shocktrooper. “Sanctuary” has Mando (Pedro Pascal) embracing his role as Baby Yoda’s guardian. They find the planet Sorgan, “a backwater scughole”, to lay low, but trouble finds them as always. Mando gets warm and fuzzy with a local villager. He explains his backstory, and why he cannot remove his helmet. Baby Yoda continues to be impossibly cute. The adorable green gurgler also makes a few friends of his own.

“Sanctuary” opens on the lush green world of Sorgan. Villagers are seen farming krill, a shrimp-like creature, in marsh ponds. Young Winta (Isla Harris) chases a frog, while her mother, Omera (Julia Jones), watches. They hear a loud boom. Birds scatter from trees. Suddenly, Klatoonian riders come racing towards them. The villagers flee into the woods. Omera grabs Winta and hides under a krill basket in the water. The raiders destroy droids, sack the village, and steal the krill harvest.

The Razor Crest flies through space. Baby Yoda sits on the cockpit controls. He gurgles and starts pressing random buttons. Noises erupt from the ship. “Stop touching things,” Mando says as he puts the child on his lap. Mando cycles through star systems. Sorgan, no spaceports, a backwater scughole, “You ready to lay low and stretch your legs for a couple of months, you little womp rat?”

The Razor Crest lands on Sorgan. Mando orders Baby Yoda to stay in the ship while he searches the area. When he opens the cargo bay, Baby Yoda appears at his feet. He beckons the little guy on and they embark into the forest.

They enter a bar in a small, but bustling settlement. Mando looks around. A Lothcat growls at Baby Yoda. He sees Cara Dune sitting by herself at a table. Baby Yoda sits on a little high chair. The waitress comes over. Mando orders bone broth for the child, then tosses her some credits. Who’s that woman? The waitress, delighted by the cash, doesn’t know. She promises to bring the broth and an extra flagon of spatchka. Mando looks at the table again. The woman is gone.

He runs outside, then turns on the tracker in his helmet. He follows her footprints around the back. She leaps out of nowhere at him. They engage in a brutal fight. Mando unleashes his flamethrower, but she pins his arm, MMA style. It comes to a draw when they both pull their blasters. They look up to see Baby Yoda watching them, sipping broth. In the bar, Cara Dune tells her story. She become a mercenary after Endor. She saw he was guild, and thought he had a fob on her. Dune stands up, they both can’t hide out. She was here first. Mando turns to Baby Yoda, “Looks like this planet is taken.”

That night, Mando is packing up the Razor Crest to leave. Two villagers approach. They want to hire Mando to stop the Klatoonian raids. “We have money, our whole village chipped in.” Mando mocks their pouch, “That’s not enough.” They turn away to leave, complaining of their long ride from the middle of nowhere. Mando perks up, “You have lodging?” They have a farm.

Mando finds Cara Dune by a campfire. He throws her the villagers credits, “You ready for round two?” She laughs at the lunch money. But Mando reminds her they are “quartering them in the middle of nowhere.” Everyone goes back to the village. The children flock towards Baby Yoda, who perks up at the attention.

Omera houses Mando and the child in a barn. She asks if Winta can feed Baby Yoda. She also brings him food. Omera introduces herself, then wonders when was the last time he removed his helmet. Yesterday, but she inquires further. When was the last time he did it around someone else? Mando admits no one has seen his face since he was a child. He was saved by the Mandalorians after his parents were murdered. Once he put his helmet on, it can never be taken off in front of another. If he does, he cannot put it back on again, “This is the way.” Omera leaves. Mando takes off his helmet in private and eats, watching the children play with Baby Yoda.

Cara Dune and Manda use his helmet to track the raiders footprints. They see a huge machine imprint in the dirt. The raiders have an AT-ST walker. They return to the village. This is not going to happen. “Nothing on the planet” can get through that armor. Omera speaks up, we will fight. Mando and Dune ask they villagers who can fire a blaster. Omera meekly raises her hand.

Mando and Dune train the villagers. They order them to dig a trench to trap the AT-ST. They build barricades and line the sides of the village. Dune has the villagers sharpen poles. She teaches them hand to hand to hand combat. Mando unloads his weaponry. He lines up the villagers for target practice. Omera is the only one that can hit the hanging pans.

That night, Mando and Dune infiltrate the raiders camp. They kill the guards. Mando puts a timed explosive charge on the main hut’s wall. They are seen and a melee ensues. Dune and Mando race out of the hut as it explodes. In the billowing smoke, the AT-ST rises out of the trees. It’s cockpit ports blazing red like sinister eyes.

They race back to the village. Everyone is ready for the ambush. They open fire as the Klatoonians run into the trap. They are gunned down, but the AT-ST does not enter the ditch. Its turbo lasers rain fire unto the village. Cara Dune grabs Mando’s pulse rifle and jumps into the water filled ditch. She opens fire at the cockpit. It takes the bait and plunges into the bog. Mando throws a charge into the cockpit. The AT-ST blows up. The Klatoonians retreat into the forest.

Weeks later, Mando and Dune are sipping spatchka. She wonders why he doesn’t stay with the widow Omera. Take off the helmet, live a good life in the village. Mando watches as Baby Yoda puts a frog in his mouth, then spits it out in front of the delighted children. He cannot stay, but the child will be safe. Mando and Omera have a tender moment as he tells her he’s leaving. She promises to take care of the child.

In the woods, a bounty hunter follows a tracking fob. He slinks towards the village. He sees Baby Yoda, and puts him in his crosshairs. He’s shot in the back by Cara Dune. Mando realizes the baby cannot stay. The villagers help him pack supplies. Mando says goodbye to Omera and Winta. He shares a firm handshake with Cara Dune. “Sanctuary” ends with their supply cart heading to the Razor Crest. Baby Yoda sits on the back, wide-eyed and bit sad at leaving his new friends.

Bryce Dallas Howard directed episode four. It was action packed, but with a deeper level of character exposition. “Sanctuary” had warmth. Actual feelings were explored. Will Mando take off his helmet for Omera? Where will Cara Dune go next? Mando and Baby Yoda’s adventure continues together. Mando officially becomes a dad, of sorts. The Mandalorian returns next week on Disney+. 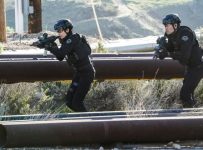 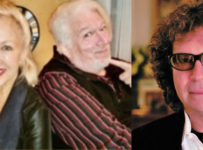 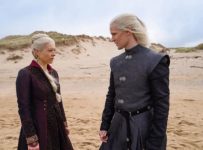 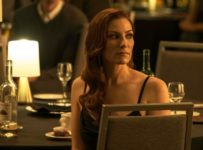 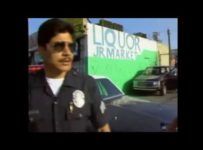 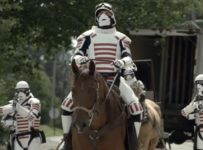