Loki’s penultimate episode, “Journey Into Mystery”, begins in the Time-Keepers chamber at the TVA. The camera swoops down on an android’s decapitated head. Then switches to an overhead shot of a crumbling city in ruins. Loki (Tom Hiddleston) stands up in a grassy field, “What is this? Where are we?” He’s surrounded by Kid (Jack Veal), Boastful (Deobia Oparei), Alligator, and Classic Loki (Richard E. Grant), who warns “they have to get going.” In the distance, a huge plume of black smoke with glowing eyes and dragon-like features approaches. “This is the Void. That’s Alioth. And we’re his lunch!”

Opening credits roll. In the Time-Keepers chamber, Sylvie (Sophia Di Martino) grabs Ravonna Renslayer’s (Gugu Mbatha-Raw) TemPad. She demands to know “who’s behind the TVA?” Ravonna “is in the dark” as well. Sylvie kicks her in the shoulder. Ravonna says Loki “is not dead.” All “pruned branches” go to a “place on the timeline” where “it won’t continue growing”, a “void at the end of time.” Ravonna doesn’t know why. She was taught that “the end of time is still being written.” Ravonna also states “that nothing ever comes back.” And that she will help Sylvie, “If she trusts her.”

In the Void, Loki follows his Variants, “Will someone explain what the hell is going on?” As Alioth approaches, Kid conjures a sword and threatens Loki to “stop wailing” or he’ll “signal” the creature. He explains this is the place the “TVA dumps everything they prune.” Alioth “makes sure nothing returns.” It’s a “living tempest that consumes matter and energy.” Loki is stunned when Alligator, wearing horns as well, growls to communicate. Classic continues that “they survive”, but “made bad plans that went nowhere.” They laugh when Loki asks if they have a TemPad.

Loki wonders why they take orders “from a boy.” He’s chastised by Classic, “Respect him. This is his kingdom.” He’s stupefied to learn Kid’s nexus event was “killing Thor.” They walk across grassy hills, pass a yellow Thanos helicopter, and reach an entrance to a bunker. The five Lokis descend into Kid’s underground hideout. Classic wants to know “why he wants to return to the TVA.”

In the TVA courtroom, Ravonna asks Miss Minutes (Tara Strong) for files “on the beginning of time” and “founding of the TVA.” Sylvie chimes in, “What if there is something beyond the Void?” She posits there may be another “timeline.” When Ravonna says it’s “impossible to go through”, Sylvie raises the baton. She doesn’t need Ravonna anymore. But Ravonna stops her by bringing up “the Void spacecraft”, a “prototype.” As Miss Minutes fumbles trying to find its files, Sylvie grabs Ravonna’s hand. She knows they’re stalling for time. The doors behind them are flung open. Minutemen surge inside as Sylvie leaps behind the dais.

“Not thinking of running are you? We know where you hide,” gloats Ravonna. Sylvie wonders if Ravonna “had her fooled”, or if “Judge Renslayer really felt betrayed by the TVA.” Slyvie wants to find “the man behind the curtain.” As the Minutemen close in, Ravonna promises to put her into a “good memory time loop.” Sylvie holsters the TempPad, stands up, and uses the baton to prune herself.

In Kid’s bunker, everyone listens to Boastful’s stories of “vanquishing Captain America and Iron Man”, then “claiming all six Infinity Stones.” He’s growled “a liar”, then attacked by Alligator before they are separated. Loki wants to hear how Classic got there. They were all supposed to be killed by Thanos. Classic did not try to stab Thanos, “Blades are worthless. They stunt our magical potential.” He cast a projection of himself, then hid as debris. He floated in space for a long time before staying in isolation on a remote planet. He was caught by the TVA when he “got lonely.”

Loki refuses to drink to their failures. He brings up Sylvie. She’s “trying to take the TVA down.” The way out is Alioth. He’s “going to kill” the creature. The others explode into raucous laughter. When Loki climbs out in a huff. He’s met at the entrance by a slew of barbarians led by President Loki (also played by Tom Hiddleston).

Sylvie wakes up in a battered school bus. She leaps outside into the Void as the bus is consumed by Alioth. But as she runs away, she senses something is being hidden by the tempest. A honking pizza delivery car comes to her rescue. It’s driven by Mobius (Owen Wilson). They race past the Sphinx and Stonehenge as Alioth is in hot pursuit.

In the bunker, President and his gang confront the others. Suddenly Boastful grabs Kid, “I betrayed you, and now I’m king.” He sold them out for supplies, but is quickly turned on by President. Who is then betrayed by his own marauders. Alligator bites off President’s hand. The bunker erupts in a wild brawl. Classic conjures a portal. He, Kid, Alligator, and Loki escape onto the grassland. “Glorious purpose…power…we cannot change. We are broken forever,” curses Classic.

Loki begs them to help him defeat Alioth and return to the TVA. Slyvie is the answer. They’re convinced to help, but “not a death sentence.” Meanwhile, as they continue escaping, Mobius reflects on his time at the TVA. “Orphaning little girls. You hunted me like a dog…classic hero stuff,” retorts Sylvie. Mobius apologizes. She thinks facing Alioth is “the answer.” Sylvie tells Mobius to turn around.

The four Lokis trudge towards a disturbance. A pruned World War II battleship appears in the Void. Alioth thunders towards it. “He’ll go after the big meal first,” says Kid. The sailors fire at the tempest to no avail. They’re quickly consumed by the cloud. Loki watches in horror. A car barrels towards them. It stops and Sylvie gets out.

Loki runs towards her, “You’re alive!” He’s equally shocked to see Mobius. He introduces “us as a child, us in the future, and us as an alligator.” Sylvie deduces “they’re all after the cloud monster.” She can’t believe the others were dumb enough to “try and kill” it. Classic, Kid, and Alligator grumble their doubts. Loki asks what’s “her plan?” Sylvie believes “the person we’re after is beyond the void at the end of time.” Alioth is just a guard dog, she is “going to enchant it.”

At the TVA, Ravonna visits an imprisoned by energy B-15 (Wunmi Mosaku). She chastises her for being “disloyal to the TVA.” B-15 claps back, “Disloyal to who? The Time-Keepers weren’t real.” She wants “people to know the truth.” Ravonna asks what drives the Variant. “She’ll be searching for whoever created the Time-Keepers.” B-15 scoffs at Ravonna, “This isn’t about protecting the TVA. You want to find whoever’s behind all of this too.” Ravonna leaves hurriedly. She asks Miss Minutes, ” I want all the files on the founding of the TVA. Whoever created this place is in danger. I must find them.”

In the Void, Mobius connects with the newfound Lokis, “It’s always a game within the game, which I respect.” Kid wonders what Mobius will do if “he gets back to the TVA.” Mobius wants “people to know the truth.” Loki and Sylvie sit together. It’s cold. He conjures a blanket and covers them both. They discuss Mobius’ theory “about our nexus event.” They struggle to admit their romantic connection. She asks if he “will betray” her in “the final moments.” He swears to “not let her down.”

Everyone watches Alioth in the distance. Sylvie “linked with it” earlier. If she can get close enough, she can enchant it. She gives the TemPad to Loki, but he refuses to leave her. He hands it to Mobius. The other Lokis stay as well. This is “our home.” Kid gives Loki his sword. Classic wishes him “luck” before walking away with Kid and Alligator. Mobius opens a portal back to TVA, “You got away in the end.” Mobius promises to “burn the TVA to the ground.” He and Loki embrace as friends. Mobius whispers “you’re my favorite” to Sylvie before leaving.

Alioth roars towards Sylvie and Loki. They need a distraction. Loki runs sideways and bares his sword. As Alioth chases him, Sylvie tries to enchant the mist. But it turns back to her. Just when she’s about to be destroyed, Classic appears behind it. He uses his powerful magic to conjure an illusion of an entire city. Alioth changes course and begins to devour the illusion.

Classic exerts all of his energy. Sylvie takes Loki’s hand, “We’re the same. You can enchant as well.” Classic holds out as long as possible. He screams “glorious purpose” before being consumed by the tempest. Sylvie and Loki hold on to wisps of the cloud. Alioth turns green as they enchant it. The cloud parts to reveal a castle surrounded by light. Sylvie and Loki walk towards it together. Loki returns next Wednesday for the series finale on Disney+. 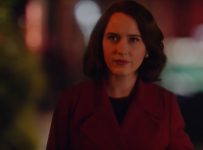 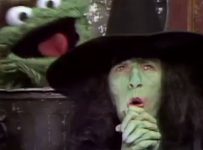 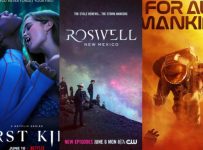 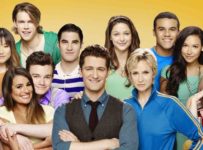 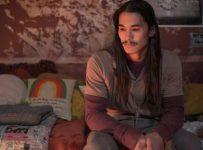 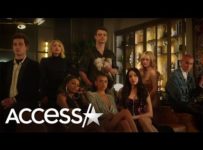