What in the hell is going on?


Seriously, though. This season is like non-stop revelation after revelation, and the breakneck pace is exhilarating, exciting, and anxiety-inducing at the same time.


Spoilers abound from here on out, people! You have been warned!


Roswell, New Mexico Season 3 Episode 2 was all about Michael thinking he was going to die, and while some signs pointed in that direction, it was still way too sketchy to figure out whether or not his assumptions were correct.


We now know they weren’t because not only did we see the casket finally, but we saw the murder.


Kyle Valenti is the unsung hero of humanity. Period.


He’s the guy who helps. He’s the guy who runs toward the emergency, not away. He’s the one who wants to do right by the people he loves, even when everything around him (including his father) tells him to put himself above others.


If there’s anyone who deserves a break, it’s Kyle. He’s everyone’s go-to therapist and problem-solver, and it’s a thankless job if we’re honest. That’s not to say it’s unappreciated, but it’s also known that Kyle will show up, whether he wants to or not, and it’s something that can easily be taken advantage of.


The foreshadowing of this hour was all over the place, from the message from Jim to the sunflowers at the farm of the worker who was attacked. And yet, it didn’t make the actual scene any less heartbreaking.


Jordan is a racist coward who struts around town like he’s some God because he’s the son of the mayor of a small town. He’s an infuriating character and a walking reminder of the kind of idiocy that still pervades this country.


He looks down upon Kyle because he’s an actual demon but deems Kyle “better than” others because he’s a doctor, yet that doesn’t stop him from physically assaulting him and leaving him for dead.


Kyle deserves so much better than what he gets, and okay, even if we can gather that Max will save him, the whole situation is sickening. Jordan BETTER is brought to justice one way or another, whether for attempted murder, assault, idiocy, anything.


So, assuming Max can save Kyle (and I won’t accept any other outcome), that would mean the funeral never takes place, right? Because Kyle living means there would no longer be a funeral.


But there are still pieces of the vision that don’t quite add up, like why would they have covered it up? I’m missing something that will hopefully be shaded in better during the next hour.


Even trying to summon the strength to heal Kyle, Max had electricity going haywire and ignited Liz’s handprint from hundreds of miles away. What the what?


This is a new phenomenon, correct? If I’m missing a time when Max’s healing hands caused Liz to have a physical reaction, please enlighten me. But assuming it’s new, what does it mean? We know these two are connected, but is the handprint a permanent kind of bond between the two?


It has to be deeper than just that, though, because Max has healed others. So, I ask again, what does it mean?

Michael: Find my friends should be called find my intergalactic enemy.
Max: Dude, I felt, I felt how strong he is, man. He is stronger than all of us.
Michael: Well, lucky for us. I got a long history of fighting someone with your face.


And all this will only increase the likelihood that Jones has to heal Max, no matter how much Max wants to fight against it.


Of course, there are valid reasons to be suspicious of his motives and any long-term goals he may have, but if those memories are to be believed (and why wouldn’t they be true?), at the very, very least, Jones has Max’s best interests at heart.


He wants Max to be okay, and no one will be okay with Max just giving up on his life when there is someone there to save it.


One of my tiny gripes with the season is there is SO much happening; it’s nearly impossible to catch everything upon first viewing because they are throwing a lot out there each week. It’s like you get an answer to one thing, and about fifty more take its place.


It’s fun, but it also makes things a bit chaotic at times and hard to keep track of. But you know answers are coming, so it’s much easier to just hitch yourself along for the ride and not worry too much about the unknown.


One known thing is that Roswell decided to give Wyatt Long a redemption arc for some odd reason, and after four episodes, I still have no idea why it was necessary.


And look, we all get it. People change; that’s part of our evolution. We aren’t the same people from birth to adolescence and then to adulthood. And some changes are out of your control. Life is a crapshoot in many ways, and you’re adapting every single day.


A redemption arc is about someone evil atoning for their sins and becoming a better person because of it.


Wyatt got amnesia. He didn’t wake up one morning and realize his racist rhetoric and penchant for hate crimes was a problem; he just forgot he ever did them. So, yes, now he gets to change the narrative, if you will, but nothing about this story is endearing or charming in the slightest.


Trying to parallel it to Rosa’s journey is clumsy, and it’s hard not to rebuke all mentions of the two of them being romantically connected. Rosa deserves better in all facets of life, and she deserves a better storyline than championing Wyatt.


Another reason this story fails to land is that Wyatt is a caricature of a bad guy. We barely know the guy outside of all the evil, so hearing he and Rosa were once friendly and the two of them have things in common falls on deaf ears because it’s exposition for exposition’s sake.


It’s far too late to have us second-guessing him at this stage of the game.


It sounds like Wyatt may be ditching Roswell for a bit, and that’s perfectly fine. If he wants to grow and change now that he’s essentially got a blank slate and was able to skirt repercussions for his actions, so be it. But do it away from Roswell and Rosa, thank you kindly.


Elsewhere in Roswell, Maria and Isobel are the ones who put together Kyle’s murder by diving into their subconscious, and it’s a crazy ride!


First off, how fun was Liz? Jeanine Mason was playing the Jacob Marley type figure in all her glory, guiding the ladies through their journey to get to the truth behind the vision.


Throughout the series, these two have gone from enemies to frenemies to family, and it’s nice to see them find their niche together. It wasn’t clear at all why Roy and Louise were in Maria’s subconscious, but it made much more sense after Isobel talked about Max and Jones being in hers.

Maria: Could you send us to the psychic vision section? We’re looking for something.
Liz: The funeral. I know. Only you can find it, Maria. But you can’t see the rest of that funeral because you don’t want to.
Maria: I threw myself off a building.
Liz: But think of it like a repressed memory. It unsettles you, so you subconscious buried it. Underneath all this. Everyone in here represents a hidden truth. Confront them, you’ll get where you wanna go. Ignore them, you gotta stay with me.


Family is so important to both of them, and they’ve both shown time and time again that they will protect their family above all else. But they seem to forget at times that they are family — like, they literally share the same blood.


Maria is in such an odd spot because she does straddle both sides of the human and alien fence. And the big three will never fully embrace her on the alien side, let’s be honest.


But regardless of what she should be included in, she’s very isolated in terms of a support system, and it was sad but good to hear her acknowledge that. The show bends over backward to paint Maria in this light where she’s the strong black woman, but in doing so, it makes it appear that she’s so strong she doesn’t need anyone else.


And that’s simply not true. Allowing her to voice her loneliness was realistic. Mimi is in poor health, she is no longer in a relationship, and her best friends have been out of town for the past year. It’s normal for her to be lonely, and it was nice to see Isobel validate her feelings.


Heather Hemmens and Lily Cowles have a great on-screen rapport, and it’s about time they took their snarky banter someplace new. It’s easy to see these two continue to grow their friendship, and it’s something to root for.


I’m also rooting for Liz to hop on a plane as soon as possible and get back to Roswell because it’s time.


The LA scenes remain disjointed and like we’re watching a different show. Heath is still an enigma, and while he seems like a good guy on the surface, we don’t really know him that well, and neither does Liz. And he’s not going anywhere, apparently.


Liz quitting Genoryx was a matter of when not if, and now she’s freed up to go home, but she’s first going to have to explain to Heath why all her electronics short-circuited and there’s a glowing handprint on her chest.


She’s going to have to lie because who even is Heath to know the truth about anything. Even telling him a minuscule amount of information about the spores was risky because she has no idea what he is capable of.


This was another solid installment that left us with a cliffhanger for the ages! I’m sure you guys have many thoughts, so please drop all your comments down below!


Were you surprised Kyle was the murder victim?


Will Max save him?


When will Liz come back to Roswell?


Do you trust Jones?


Always remember to watch Roswell, New Mexico online via TV Fanatic when you need to catch up with your favorite aliens! 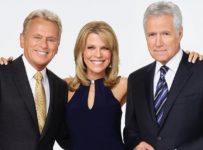 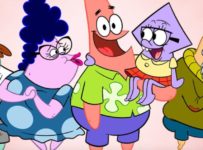 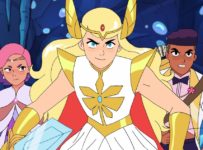 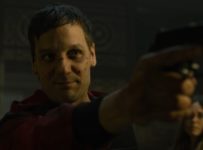 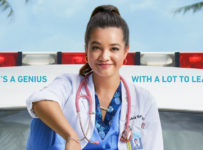 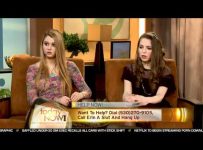