The Marvel Cinematic Universe comes to Disney+ plus with WandaVision, a television series with Wanda Maximoff (Elizabeth Olsen) and Vision (Paul Bettany) as a fifties era, newly married couple, living in a bizarre sitcom suburbia. Episode One plays out like the classic television series “Bewitched”. She’s the doting housewife, while he’s the affable but goofy working-man husband. They hide their powers from their nosy neighbor, Agnes (Kathryn Hahn), and Vision’s coworkers. It’s hijinks and hilarious miscommunication as the pair bumble through an unexpected dinner. But a dark turn in the final seconds reveals the happy couple is under sinister observation.

Episode One opens with the familiar Marvel Studios logo. But at the end sequence, it becomes black and white, then changes to the old 4:3, square box, aspect ratio. Continuing in black and white, a cheery song plays about a new couple coming to town. Wanda, in a white wedding dress and bouncy curls, sits in the passenger seat as Vision drives a fifties sedan. She waves at the postman as Vision pulls his fedora down to hide his android face. They pull into a suburban home with a white picket fence. Wanda waves her hand, the “For Sale” sign in the front transforms to “Sold!”. Vision picks up Wanda, then materializes through the front door, accidentally dropping her outside. He realizes his mistake, then picks her up again and takes her inside. He twirls her in the living room as the cheery song finishes and fifties era credits roll on screen.

In the kitchen, dressed as a housewife in an apron, Wanda arranges dishes with her telekinetic powers. Vision walks in and a dish smashes into his head. A laugh track howls. Wanda reassembles the plate. She offers to make a big breakfast, but Vision replies, “I don’t eat food.” He continues, “Is there something special about today?” He points to the wall calendar. There’s a heart symbol drawn on the day. They have no idea why today is so important. They are celebrating something. Vision, who remembers everything, but has no clue, prepares to go to work. Wanda sweetly reminds him, “Don’t forget.” Vision waves his hand and his human face appears before leaving.

Wanda looks at the calendar confused, then hears a knock at the front door. She answers it to reveal Agnes (Kathryn Hahn), her “neighbor to the right.” Agnes gives her a plant as a welcome gift. She barges in, inquiring her name, and how she moved in so quickly. Wanda says she’s married, but Agnes notices she doesn’t have a ring. Wanda mentions they have a special night planned later. Agnes mockes her husband Ralph, and offers to bring a magazine on how to host a dinner party. The laugh track follows each of Agnes’ quips.

The next scene opens at the “Computational Services Inc.” building. “Yakkity Yak” blares on a radio as Vision works at an adding machine with super speed. He gives a huge load of files to his amazed coworker, Norm (Asif Ali). Vision asks what are they actually doing at this job? Norm has no idea, “but productivity has gone up 300% since you got here.” Norm calls him a “walking computer.” Vision retorts, “No, I am a carbon based employee made from organic matter, much like yourself.” He confides that today is a special day with his wife, but he cannot remember why.

Their boss’s door opens in a huff. Everyone scurries back to their desks as Mr.Hart (Fred Melamed) barrels out. He aggressively tells Vision, “I’m looking forward to dinner at your house this evening.” Vision suddenly realizes what the special occasion, the heart symbol on the calendar, meant. Mr. Hart stresses the importance of the employee dinner. He points to the now fired Jones (David Lengel), packing his desk after a poor impression, despite “a five course dinner” and a “string quartet.” Mr. Hart considers himself “a keen judge of character.” He hopes Vision “has no skeletons in the closet.” Vision replies, “I don’t have a skeleton sir.” The laugh track bellows.

Back at the house, Agnes goes through the magazine’s dinner recommendations. She’s surprised that Wanda and Vision don’t have a special song. Agnes gives her fifties era seduction techniques, like stumbling so her husband can catch her. The pair are preparing for a romantic dinner. Vision calls “about tonight”, but Wanda swears “she has everything under control.” Vision continues that “it may be the end if everything doesn’t go right.” Wanda is taken aback, she promises to make everything fantastic, still not realizing the boss is coming for dinner.

The action breaks with a fifties commercial interlude. A man asks, “Is your husband tired of burnt toast?” A toaster pops up smoking, charred toast, he then walks over to a woman, again dressed as a fifties housewife. They stand in front of the “Toast Mate 2000” from Stark Industries, whose two settings can make toast, meatloaf, and cherry pie. A red button beeps ominously. The commercial ends with a slogan, “Forget the past, this is your future!”

That night, Vision returns home with Mr. and Mrs. Hart (Debra Jo Rupp). The living room is lit by candles,the lamp is covered in lace. Vision races in the kitchen to find Wanda. Wanda saunters into the living room in her white nightgown and covers Mr. Hart’s eyes with her hands. “Guess who,” she asks seductively. Vision comes back from the kitchen and turns on the lights,”Wanda!”

Wanda recoils in embarrassment. “What’s the meaning of this,” Mr. Hart demands. Vision blubbers, “Oh…this is the traditional Sokovian greeting of hospitality.” He puts his hands over Wanda’s eyes, “I forgot to tell you my wife is from Europe.” The laugh track explodes. Mrs. Hart admires her gown. Mr. Hart wonders if they’re “Bolsheviks.” Wanda grabs Vision and takes him to the kitchen. He blows out the candles.

Vision wonders what’s she wearing? He explains that the special occasion is dinner with his boss and wife. Wanda snaps her fingers and appears in a dinner dress. Vision goes back in the living room to stall the Harts. As Mr. Hart drones, Vision asks again what are all the forms for? He gets another mystery response as Mrs. Hart gets faint from hunger.

In the kitchen, Agnes comes over with groceries for a gourmet meal. The commotion startles Mrs. Hart who walks to the kitchen to help. Vision intercepts her and steers her back to the couch. Wanda pushes Agnes out the back door, then uses her powers to spring the groceries to action. Mrs. Hart, hearing more noise, goes to open the kitchen blinds. Vision starts singing “Yakkity Yak” and grabs the Harts’ attention. They don’t see all the food and pots flying through the air. The laugh track is on overload from the calamity.

Vision grabs a ukulele and tries to sing with the Harts. Meanwhile, Wanda is burning all of the food. Vision goes back to the kitchen in time to see Wanda accidentally hurl two lobsters out of the window. Vision tenderizes the meat, while Wanda takes a shot at entertaining the Harts. She stumbles on purpose so Mr. Hart can catch her. Agnes shows up at the front door with a pineapple. Wanda grabs it and slams the door. Mrs. Hart begins to stumble from hunger.

Mr. Hart has had enough, “I’m beginning to think you’re not management material Vision!” As he yells, Wanda uses her powers to set the table with a delicious…breakfast. Wanda announces that breakfast for dinner is served. Mrs. Hart comments, “How European!” Wanda and Vision are unable to answer any of Mrs. Hart’s personal questions about their story. Mr. Hart gets testy, “Honestly, why did you come here?” He slams his hand on the table.

Wanda freezes in a strange way. The scene suddenly takes an ominous turn. Mr. Hart begins to choke on a sausage. As he struggles to breathe, Mrs. Hart worriedly, but almost robotic, tells him to “stop it” repeatedly. Mr. Hart falls down on the floor. Wanda looks on in terror and confusion, “Vision, help him!” Vision uses his phasing power to pull the sausage from Mr. Hart’s throat. He helps him back to the table. Mr. Hart looks at his watch, “Look at the time, we better be going.”

As Wanda leads them to the front door, Mrs. Hart thanks them for a lovely time. She covers Wanda’s eyes for the traditional Sokovian greeting. The laugh track returns. Mr. Hart congratulates Vision and promises a promotion. When they open the door, a lobster is hitched on the knocker.

Vision reverts back to his natural form. He sits with Wanda on the couch relieved. “We are an unusual couple you know,” Wanda realizes. They decide to make that day their anniversary, and “Yakkity Yak” as their song. They lock hands, Wanda materializes wedding rings. They both say “I do” and kiss. The laugh track claps as the scene minimizes their heads together. The aspect ratio returns to letterbox as fifties era credits roll. But the screen pulls back further, in color, to reveal that someone has been watching them on a monitor, in a modern studio filled with electronic equipment. Mysterious hands close a notebook with a symbol of a sword going through a circle.

Director Matt Shakman (It’s Always Sunny in Philadelphia) and showrunner/writer Jac Schaeffer nail the fifties sitcom satire. Elizabeth Olsen and Paul Bettany are equally good playing out their traditional suburban roles. It’s obvious that Wanda and Vision are in some kind of simulation. And since Vision was killed in Avengers: Infinity War, it’s safe to deduce that everything seen is Wanda’s fantasy of their married life. The commercial interlude and the reveal at the end hint at an organization manipulating Wanda. At first blush, I think the storyline has to be based on the “House of M” comic series. We’ll see if that turns out to be true, but the first episode is certainly entertaining. New WandaVision episodes will premiere every Friday on Disney+. 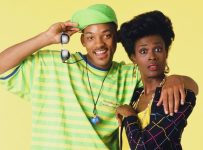 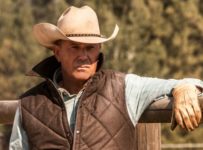 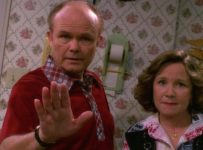 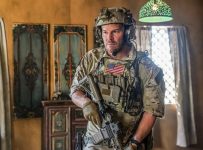 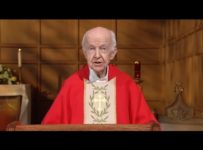 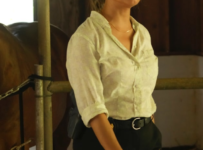